The Well Fed Homestead
Warning: this post contains actual images of chicken butchering. I wouldn’t recommend looking at this while eating if you have a sensitive tummy!
This was the day–we were going to butcher all 105 chickens, plus a goose, a duck or two, and maybe the turkeys. It didn’t go exactly as planned, but it was still a good day! 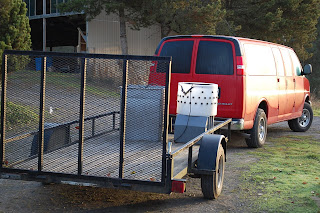 First we borrowed our friends’ flatbed trailer, and used it to rent the equipment. We rented the equipment for $50 for 2 days from Portable Plucker. It included the killing cones, scalder, plucker, and a chilling bath. You can purchase a scalder on Amazon, or both a scalder and a plucker from Featherman (you can also see places to rent this equipment in your state from this site).
You can see that the trailer was a bit over-kill and the stuff could have fit in our van. We’re newbies, what can we say? 🙂
These ladies and gentlemen had no clue that their day had come. They were starving, and that’s all they knew! They didn’t get to eat anything besides grass Sunday evening (before Monday morning butchering). 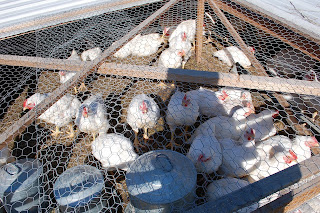 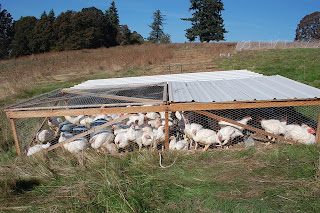 Here’s a good shot of the Chicken Tractor that The Farmer built, using Joel Salatin’s design in Pastured Poultry Profits. We had about 105 birds in there. They’re all up at the front of it, but there’s enough space for them to spread out more in the back. They’re just really dumb birds. =)
The Farmer moved them to new grass every day.
It took us a lot of the morning to get set up. We set everything up right out by the chickens. We just had to make sure that a few hoses could reach out there. You can see the scalder and the plucker.
*IT TOOK A FEW HOURS FOR THE SCALDER TO GET HEATED UP.* This was a surprise to us, so I just wanted to let you know! =) 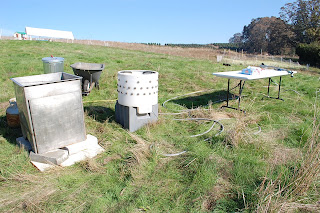 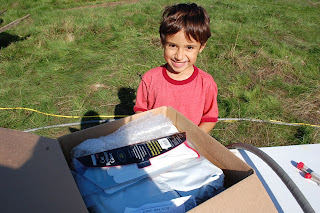 Farm Boy 3 is a cutie pie, isn’t he? 🙂 He helped carry up the box of supplies. Cut-resistant gloves, plastic bags for packaging, and hog rings to close up the bags.
This truly was a family event!
I was cleaning out the chill tank. This came with the rental of the equipment. 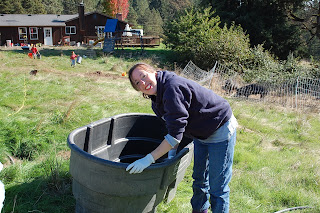 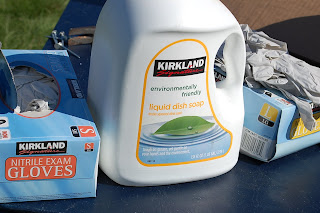 A few necessary supplies: gloves in various sizes, and a safe dish soap. Joel Salatin recommends pouring a couple of tablespoons of dish soap into the scalder. 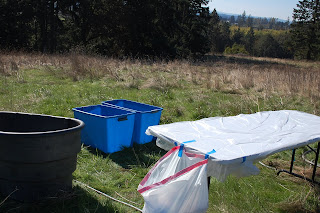 Here’s part of our set up: a long plastic table with plastic taped over it, a garbage bag (for garbage). Two plastic tubs (for hearts, livers, and feet). We also had a wheelbarrow there for all of the compostable items (chicken heads, intestines, etc.). 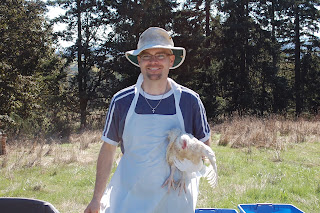 Bird #1. The Farm Boys and the Farm Princess call the birds that don’t look very good “Poor.” This was one of our two Poors this time. The first time we tried our hand at raising broilers we had several more Poors. =) 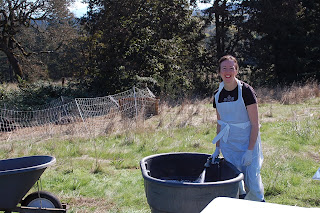 We filled this huge tank with 5 large bags of ice and some water. This is where the birds would go after butchering, to chill.
Don’t forget to wear aprons! 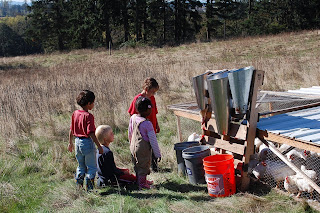 The Farmer was brilliant & found an old pallet to prop up and nail the killing cones on to. All of the Farm Kids watched the first bird bleed out. 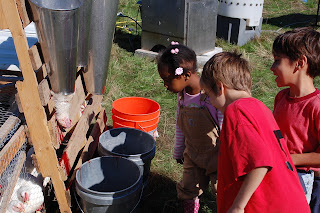 The buckets below are to catch the blood, which is compostable.
The first time we butchered, Farm Princess was with a friend. She’s only 3 & we weren’t sure how she would handle it. 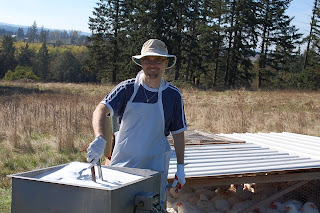 The Farmer, using the scalder! You need something to pull the birds out. We opted for barbecue tongs.
Early in the morning, you need to fill up the scalder and get it turned on. Make sure you have enough propane. 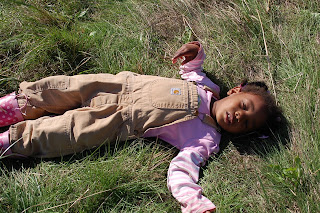 Farm Princess suddenly wasn’t feeling very well. She said her tummy hurt and she needed to lay down. I think she was a little grossed out. =) She kept asking why the chicken had a bloody nose. =) 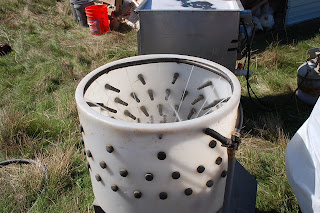 The plucker. It needs a hose hooked up to it, and power. This piece of equipment is *AMAZING*. In less than a minute, a bird can have most to all of its feathers removed with this handy, dandy machine. 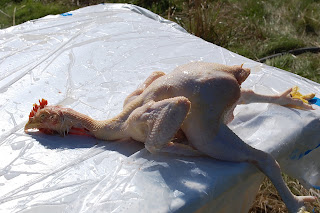 A chicken after it came out of the plucker. See how clean it looks? No feathers! 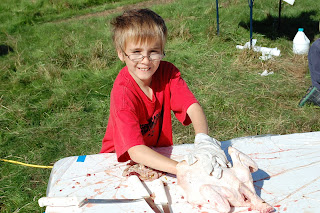 Farm Boy 1 was a champion gut remover! We didn’t let him use the knives (he’s 9), but we would pull (or cut) the head off, loosen the crop and the windpipe, cut off the oil gland, cut off the feet, and make a slit to get all of the intestines out. He would reach inside the bird and grab everything out. What a great kid! 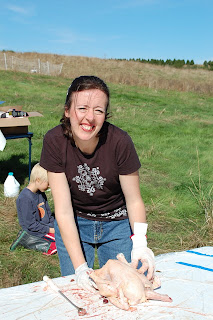 Here I am working on a bird. Other jobs the kids did:
~Put birds into the killing cones.
~Separated the hearts from the livers.
~Put the hearts, livers and feet in appropriate containers. ~Put all of the intestines into the wheelbarrow.
~Put the dressed chickens into the ice bath (Farm Boy 2 said “you’re all dressed in your swimming suit!” and then he’d drop them in the ice bath).
~Packaged the hearts, livers and feet.
~Carried bags of packaged chicken to the freezer. 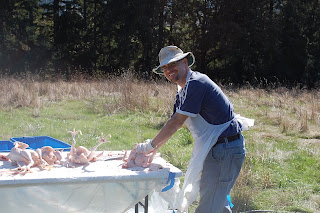 The Farmer, doing his station! We set up stations (after the scalding/plucking):
1. The Farmer would cut off the feet, head, loosen the crop & windpipe, and make a slit.
2. Farm Boy 1 or Farm Boy 2 or The Farmer’s Wife would get the intestines out.
3. The Farmer’s Wife did Quality Control. Scraped out the lungs, made sure everything was gone, cut off the vent, and hosed down the bird.
The downfalls of the day:
We planned to butcher all day, but we didn’t get started until about 12:30 because the scalder wasn’t hot enough before then, and it just took us a long time to get everything set up.
We only got about 50 birds butchered, and no ducks, turkeys or geese. (We had evening plans–people were at our home by 6:30 pm. So we worked from about 12:30 to 5:00 (me & the Farm Kids) or 6:15 (The Farmer) and butchered 50 chickens. Not bad for our first real butchering experience.
The great things:
We butchered 50 chickens! All on our own! No help!
Our kids were such great helpers! We worked as a family and we worked hard!
Stay tuned for part 2!

I'm not a doctor, and I don't have a fancy title. I've got a bachelor's degree in English, a bunch of experience with my own health and the health of my kids, and a whole lot of passion about real food and legitimate research and studies. That said, I have to tell you that you should probably consult with your doctor before following any of the advice that I give. Hopefully you've got a really good doctor who believes in real food and who cares about your long-term health! :) Also, I have to let you know that I've got affiliate links on this site. If you click on them and buy something, there will be no additional cost to you, but I may make a small percentage. I don't link to products or services that I would not honestly recommend to my friends!

Where to find me!